Have a Slice of Nostalgia: The Return of Viennetta

A British confection launched in the ’80s is headed back to the United States.

Wall’s brought what’s considered by some the first-ever branded ice cream dessert—Viennetta—to the world almost 40 years ago. The British frozen dessert and ice cream producer, owned by Unilever, launched the legendary treat in 1982.

Viennetta is said to be based on a multi-layered pastry known as mille-feuille. The original Wall’s product consists of layers of vanilla ice cream and compound chocolate that create the dessert’s signature wavy top. 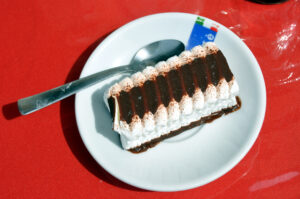 While Viennetta was a product of Wall’s in Europe, it came to America under Unilever’s Breyers label. At one point in the ’90s, the product disappeared from the United States, though it maintained a presence throughout Europe, Australia, New Zealand, and elsewhere.

As an ’80s kid, I remember seeing Viennetta commercials late in the decade,  or perhaps I saw them in the early ’90s. Either way, the images of what passed for elegance and sophistication back then informed me that Viennetta must be a “fancy” dessert. I mean, c’mon—it was served on a silver platter!

Alas, I never had the opportunity to taste what I could only assume back then was an opulent dessert before it was so cruelly whisked out of the country. But that will change this year.

Unilever is bringing at least the original vanilla flavor back to the States in 2021 under their Good Humor brand. Back in the ’80s, Viennetta wasn’t available solely at supermarkets—it was also sold at KFCs and Pizza Huts. I’ve found no announcements from Unilever or Good Humor that Viennetta will be available through a partnership at any restaurants this year, but it would make sense.

Can you experience nostalgia if you’ve never actually owned, enjoyed or consumed a product in the past personally? Apparently the answer is yes, because when I saw Viennetta was returning to America my first thought was, “Finally—I’ll have my chance,” followed by a flood of images from my childhood and early teen years.

Should I be ashamed? Maybe. But I’m not. And I know I’m not alone. And I know something else: Operators looking to leverage nostalgia, particularly if they’re ’80s- or ’90s-themed or feature programming around those decades, should be excited about this news.